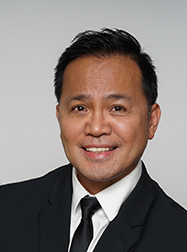 Alex Laroco is the first Filipino-American and Asian-American to be appointed to serve as a member of the Board of Commissioners, Housing Authority of the City of Pittsburgh, by Mayor Bill Peduto. Alex is a U.S. Navy Veteran who served during the Operation Desert Storm and Desert Shield. He was awarded the Armed Forces Expeditionary Medal, Kuwait Liberation Medal and Southwest Asia Medal as member of the Coalition Forces for the Liberation of Kuwait and as a recognition of his military service during the years of the Persian Gulf War. His Navy career included assignments to Attack Squadron 176 at Naval Air Station Oceana, USS John F. Kennedy in Norfolk, Virginia, Personnel Support Detachment Atsugi Japan, the USS Independence in Yokosuka, Japan and Navy Recruiting District in Seattle, Washington.He received a B.S. degree in Electrical Engineering from Saint Louis University and studied Wireless Communication Technology at Seattle Central College. He is the first Filipino-American to be elected as Judge of Election in his district of Pittsburgh and an active volunteer in the West End Community Group.  Alex loves taking his two dogs to the city parks, downtown Pittsburgh, hiking trails for long walks and hikes.  His hobbies include photography and interior design. He is currently working for Schneider Downs & Co, Inc., one of the 60 largest public accounting firms in the country and located in downtown Pittsburgh.